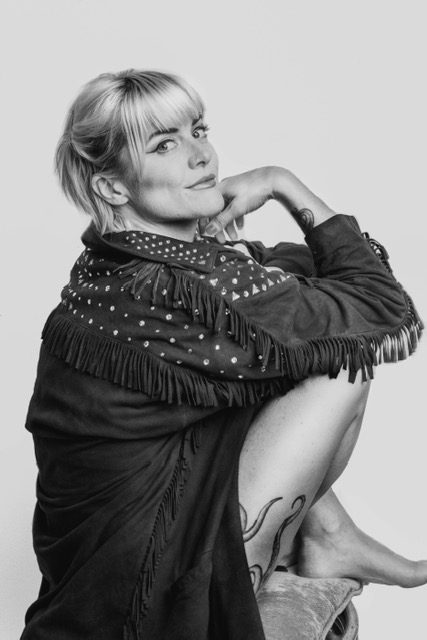 We have with us today Juliet Hawkins. Excited to hear more about you. What is your music story? How did you get to where you are now?

Music came easy to me, unlike just about everything else I was told to learn growing up. It was a place for me to escape to. I’ve always had a wild imagination and in my younger years I was really a misfit and a rule breaker and a pretty bad student, but music was the one thing inside me that allowed me a place to be me, authentically, to color out of the lines, to feel like I belonged somewhere on this planet, where the rules didn’t apply. I wrote a lot of poetry as a kid and though I took piano lessons for nearly 10 years, I found my mom’s Yamaha guitar with only two strings on it in the attic when I was about 12 years old and totally fell in love. I quit piano lessons and began to teach myself to play. That’s when I started putting my poetry writing ability to a melody. Fast forward to my late 20’s, I was living in San Diego and joined a Clapton and Cream tribute band. It was with that band where I learned to move on stage, to belt, to work a crowd. I grew tired of singing other people’s music so I put together an EP I recorded in a friend’s garage and though I was warned of the “competition” in Nashville, I knew if I wanted to be great, I must be around the best and without having been there before, I took the leap of faith. It was in Nashville where my career as an original artist really blossomed. I met a brilliant engineer named Pete Eddins who helped me record a bunch of singles including an EP I wrote during quarantine. I found incredibly talented musicians to learn my music and put a band together. I got here because I didn’t listen to what people said; I kept going, most of the time alone; I didn’t give up; I believed in myself and music as an outlet to heal and wanted to spread that message of hope to others, so I did.

How were you sure music is something you wanted to pursue?

It was really the only thing that I was naturally good at and interested in improving on. It was also the only thing that gave me a sense of peace in what was a series of pretty dark years in my early 20’s. It allowed me to translate my pain or depression or darkness into an art form. Nobody could take it from me.

We know the industry can be frustrating but what is your favorite part of pursuing music? Writing, recording, touring?

Music gives me a sense of freedom, purpose, and belonging. Though I prefer to write alone, my favorite part is hearing how the band expands the ideas that were once just spinning around in my head-when you take the songbird to the symphony, so to speak, it’s pure magic. Playing together, when there’s chemistry and you’re all riding that ethereal wave together, it’s like you’re all sharing a bed. It takes you out of yourself and into this other world that feels sacred to me. When I’m playing on stage with my bandmates, nothing else matters; it’s when I feel most alive.

What do you do for fun outside of music?

I like to paint, usually creatures I see in my dreams or I create in my mind. I hang out with my dog Bernie, I rollerblade, I like camping and really anything in the woods or by the sea. Getting away from crowds, or from the industry in general to let my inner child run free, is essential for my mental health.

Tell us something most people don’t know about you.

I spin fire! You can see me doing it in my music video “I’ll Play Daddy”!

Okay – tough question. If you HAD to choose – what would be your favorite song of all time?

The Rainbow Connection. It’s got the most powerful message of unity and hope and reminds me of my grandmother.

Tell us where we can find your latest music and keep up with you on social media.

I just released a new single, Hot Damn, available on all platforms under Juliet Hawkins. You can also follow my journey on instagram under Juliethawkinsofficial for show updates and upcoming releases!