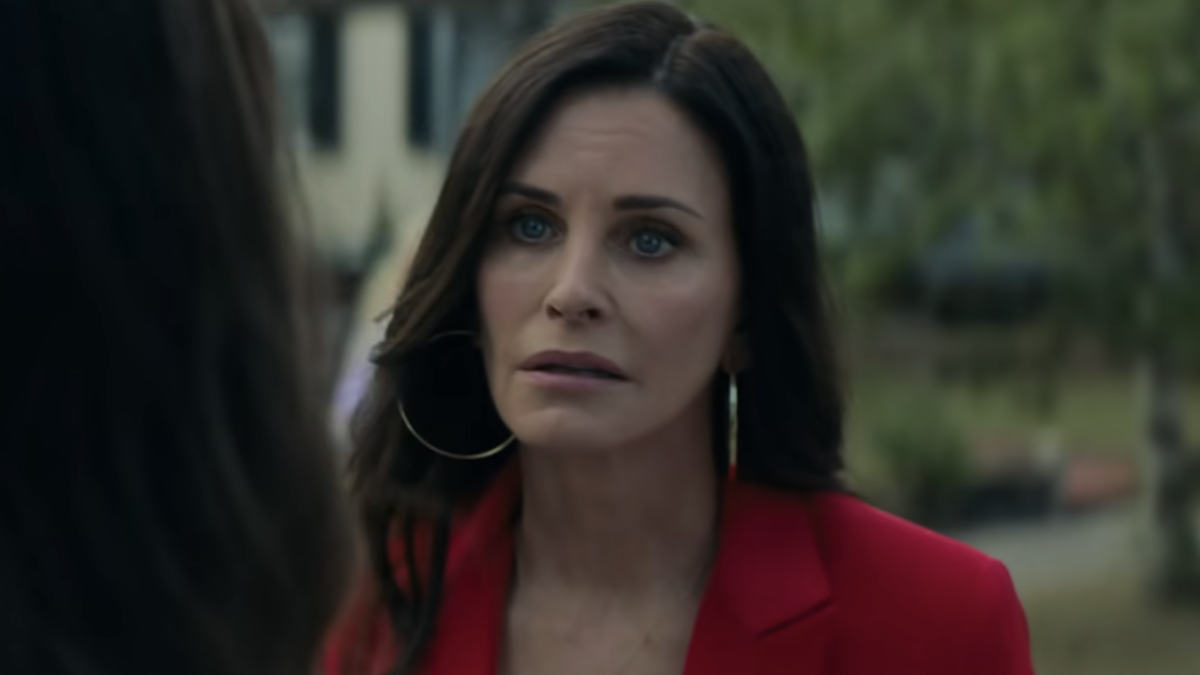 It’s a good time to be a horror fan, as the genre has been experiencing a renaissance for a number of years now. As a result, we’ve seen some of the best horror movies back in theaters via new sequels. This includes the 2022 Scream movie, which performed so well another slasher was immediately green lit by Paramount. While fans were disappointed that Neve Campbell left Scream 6, the first set photo of Courteney Cox is going to please hardcore fans.

It’s almost impossible to imagine a Scream movie without Neve Campbell’s protagonist Sidney Prescott, but it looks like the upcoming sixth movie is going to give us just that. Campbell departed the slasher due to negotiations around her pay, and now it looks like Courteney Cox will be the only member of the original trio of heroes who will play a role. People caught a shot of the Friends alum on the movie’s set, and she’s back to rocking Gale Weathers’ signature colorful suits. This time it’s bright blue.

While not much is known about the contents of Scream 6 or how Gale Weathers will factor into the story, it’s exciting that Courteney Cox’s beloved character will be bringing her signature style to the upcoming slasher. While the new movie will definitely feel different without Neve Campbell or David Arquette, it’s comforting to know that some things stay the same.

Scream 6 is clearly in the midst of filming, despite the recent fallout with Neve Campbell. The script presumably had to be reworked quickly, and I’m eager to see just how this all shakes out in the theatrical cut. Although the synopsis did confirm that the main story will focus on the two pairs of surviving siblings from the last movie, played by Melissa Barrera, Jenna Ortega, Jasmin Savoy Brown, and Mason Gooding.

From the sounds of it, directors Matt Bettinelli-Olpin and Tyler Gillett had intended for Neve Campbell’s Sidney Prescott to factor into the story. She was originally waiting to see what the script looked like before signing on, but ultimately revealed that she didn’t think she was being paid enough for the project. Fans and Scream cast members new and old have put their support behind the iconic scream queen, but the disappointment is still real.

Since David Arquette’s Dewey was killed off in the 2022 Scream, it looks like Courteney Cox will be the only original hero to factor into the upcoming sixth movie. Luckily for fans, there is another fan favorite character returning: Scream 4’s Kirby Reed aka Hayden Panettiere. Fans long theorized that Kirby was alive, with an easter egg in the last movie confirming it. But Panettiere will be back to face off against Ghostface, hopefully with a significant role.

Scream 6 is currently expected to arrive in theaters on March 31st, 2023. In the meantime, check out the 2022 movie release dates to plan your next movie experience.