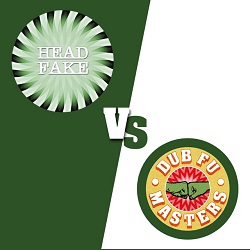 When the beat is moving like it is in the song “One Step” by Head Fake and Dub Fu Masters, there isn’t anything a listener can do to stop the rhythm from inflicting a lot of carnal emotion upon anyone within earshot of the music. In a record like the eponymous collaboration from these two indie acts, a beat can mean so much more than a melody would, and yet the two elements are surprisingly well-matched in “One Step,” “Trump Funk,” and “Overjoyed” the same. Experimentalism is the order of the day in this EP, and although there’s been a lot of noteworthy envelope-pushing from around the American underground this year, it wasn’t until I recently stumbled upon this disc that I felt like someone was getting the throwback concept right.

What’s spot-on about this EP isn’t as much its balance of instrumentation, but what that balance is able to produce on the backend of big, physical moments like those we hear in “Trump Funk.” Finding that sweet spot between the worship of brawn and stabilization through sonic virtuosity isn’t an easy task for any artists, no matter where they stand in the hierarchy of underground players, but to have brought together such conflictive elements inside of a seventeen-minute extended play – as Head Fake Vs Dub Fu Masters does – is to do something that a lot of other acts have tried but failed to accomplish on their own. The ambitiousness is there, but never does this record sound like it’s a reach for the parties who made it.

I’ve been aware of Head Fake for a little while now, but I was surprised at how well-suited Dub Fu Masters were to team up for this kind of a project. The chemistry they’ve got is worthwhile, and it results in a tense standoff via “Overjoyed” which might be my favorite moment from the entire EP. There’s nothing better than when artists of an equal caliber get in the same studio and go to war with each other melodically and rhythmically, and I think these three tracks each showcase a bit of clashing in the best possible way. It’s all about contrast, but for the most part, I think that’s why Head Fake Vs Dub Fu Masters works as well as it does.

Forget playing nice and pacifying the trend-lovers of the mainstream – in this collaborative masterpiece, getting into the trenches and exploring the dirty side of a beat n’ harmony concept is all that really matters. Head Fake keeps scoring big points with me, and in starting the mad fire that they do with Dub Fu Masters this summer, I believe both acts are going to see an exponential boost in support from across the pop spectrum (for reasons made more than clear when you listen to any of the songs on this record). EPs can be a hit-or-miss affair, but this is one three-track collection that I would recommend anyone who digs high-quality melodic craftsmanship take a close look at.