It was meant to be a moment of celebration.

When the British Vogue and the Duchess of Sussex herself, Meghan Markle, unveiled their historic collaboration on the September 2019 issue—known for being the most important issue the magazine publishes each year as it previews fashion for the upcoming fall/winter season—it marked not only the first time a member of the British Royal family guest-edited the esteemed fashion bible, but the first time anyone had been brought aboard to guest-edit the pivotal issue.

And true to form, the socially-conscious former Suits star took the opportunity to shift the magazine’s usual fashion-forward focus to something a bit deeper, titling the issue “Forces for Change,” placing photos of 15 “brilliant female changemakers who have had a laudable impact in recent times and who are set to reshape society in radical and positive ways in the future” on the cover. Turning down an opportunity to appear on the cover herself—”In the end, she felt that it would be in some ways a ‘boastful’ thing to do for this particular project,” Edward Enninful, British Vogue‘s Editor-in-Chief, said—she, instead, put the spotlight on “the women she admires,” including Yara Shahidi, Gemma Chan, Salma Hayek, New Zealand Prime Minister Jacinda Ardern, and climate change campaigner and student Greta Thunberg, among many others.

She requested that photographer Peter Lingbergh, whom she worked with on her 2017 Vanity Fair cover story, allow freckles into the photos of the 15 cover stars, allowing, as Enninful said, us to see “beauty in real people, in real situations.” She interviewed former First Lady of the United States Michelle Obama while hubby Prince Harry spoke with Dr. Jane Goodall. She spent seven months, working in secret, to “create an issue of inclusivity and inspiration, focusing on what connects us rather than what divides us,” as noted on the Duke and Duchess’ official joint Instagram account.

In short, she did did the work.

The issue, which will be available on newsstands August 2, feels like a natural extension of Meghan’s previous journalistic endeavor, her now-defunct lifestyle website The Tig where she, in part, profiled inspirational women as she highlighted issues of gender inequality and expressed her outspoken feminist views. It’s so in-step with who we know Meghan to be as a person that one would be hard-pressed to fault her. It’s exactly the sort of issue of Vogue she’d create if given the chance. 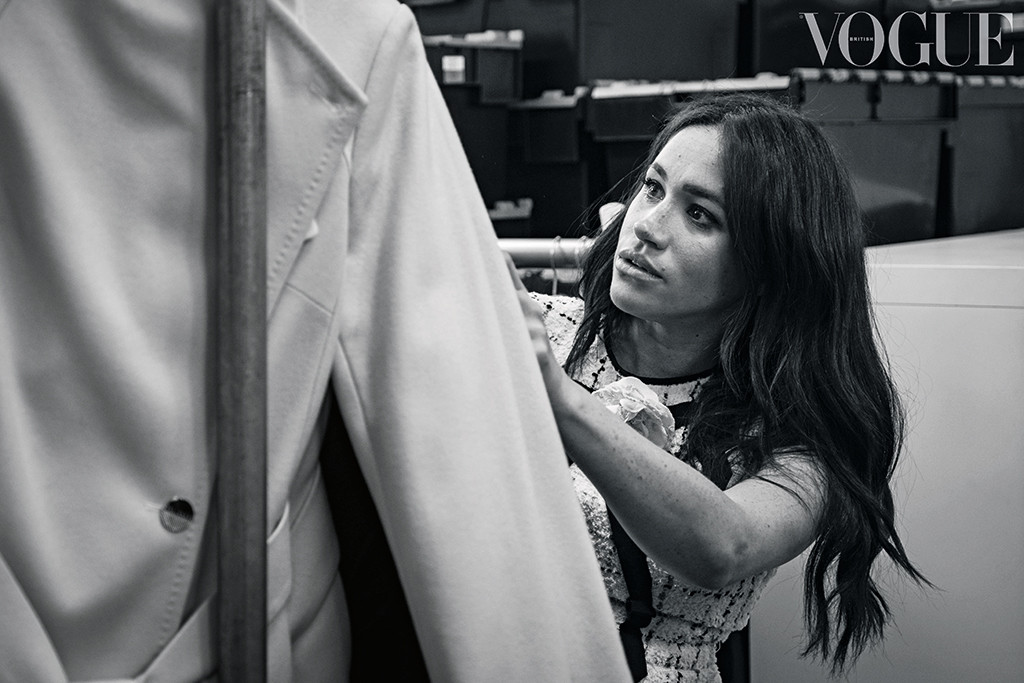 But with the internet being what it is and the British tabloid press being who they are, with neither ever passing up an opportunity to find something wrong with each and every step Meghan takes, the critics got into formation and quickly had their fangs out. There were those on Twitter who wanted to know why Meghan hadn’t included Queen Elizabeth II among her list of trailblazers, or even “a doctor or nurse, a teacher, lawyer,” as another wondered. Others wondered why Meghan had skipped out on meeting President Donald Trump during his recent state visit, citing her maternity leave for the absence, but was able and willing to devote the entirety of said leave to the issue, not to mention interviewing the former First Lady.

Piers Morgan, who’s never not without a hot take on the Duchess (or anything else, for that matter), slammed her “shamelessly hypocritical super-woke Vogue stunt” in a scathing op-ed for the Daily Mail, lashing out at her “greatest hits of virtue-signalling” while “[excluding] the planet’s entire male population” and “promoting Brand Meghan to America” rather than “promoting Brand Britain.” (Although, he seemed to take most umbrage with the inclusion of The Good Place star Jameela Jamil, who’s dared to criticize him in the past, among the list of trailblazers, so read into that what you will.)

There was one royal commentator, Rob Johnson, who told Sky News that, by asking the New Zealand Prime Minister to take part, she’d gotten involved in politics—an apparent big no-no for members of the Royal Family that only seems to be a problem when they’re speaking to/of a politician the critic disagrees with. Another, Bobby Friedman, told the UK news outlet that the reaction was likely so strong because it came after “a very few difficult months for her,” months that saw her draw criticism for keeping baby Archie’s christening a private affair, for asking no photos be taken of her while supporting pal Serena Williams at Wimbledon, for how she and Harry wished Prince George a happy birthday, and for supposedly demanding their neighbors at Frogmore Cottage not approach or instigate conversation with her or her husband should their paths cross. (That last claim was roundly debunked by a Buckingham Palace spokesperson, who told E! News, “The Duke and Duchess didn’t request this, didn’t know about it, and had nothing to do with the content or guidance offered.”)

‘Where the impression, probably unfairly, that people are getting is that Meghan sees her self as an A-lister, as a Taylor Swift or Beyoncé, not as a member of the Royal Family,” Friedman said. “You have to remember that for the Royal Family in this country we have a social contract, they give us and in return, we support them, financially and emotionally. What the impression you get with Meghan Markle at the moment, unfortunately, is that she doesn’t want to do the hard yard. She is happy turning up at London fashion week, she is happy going on the stage of Hamilton. Can she do it in the provinces on a wet Wednesday in November? You get the impression that she doesn’t really want to.” 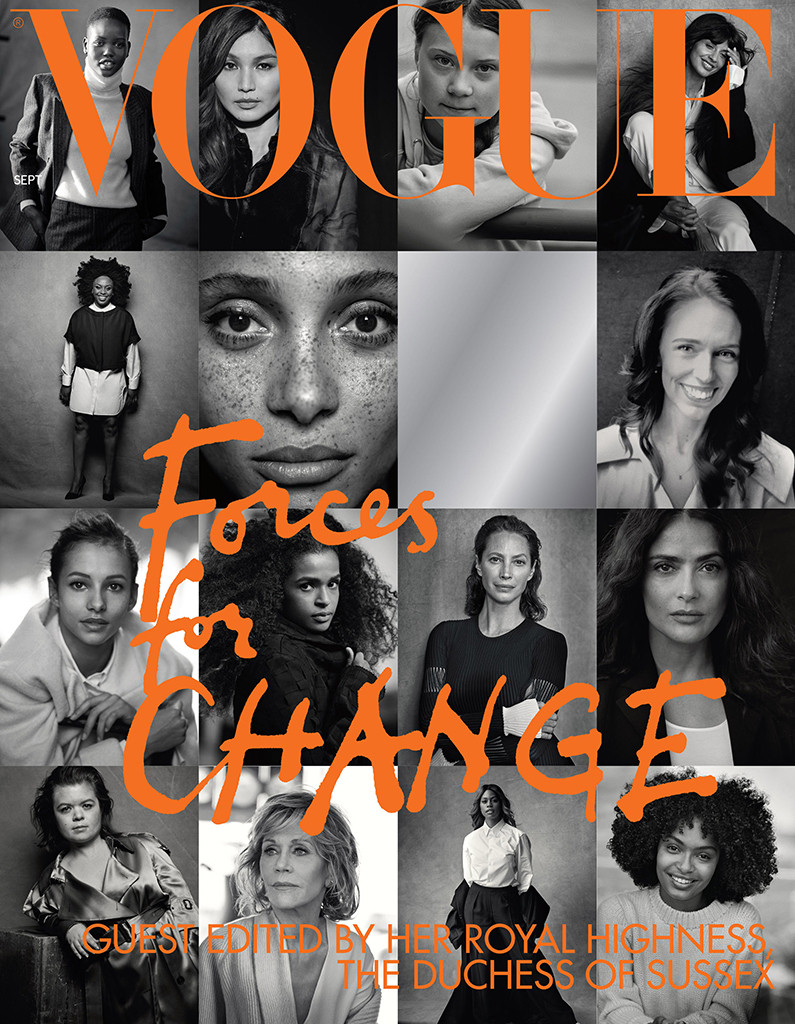 After touching down on the instances in past weeks where Meghan had been criticized by the British public, Friedman added, “All of this gives a sense, a bit unfairly, that she is in it for the celebrity, that she sees herself as an A-lister. So choosing at this moment to edit a fashion magazine is a mistake and choosing to do it this way, as Robert mentioned before she is choosing political figures. She is politicising the Royal Family and I think that goes too far and is unwise.”

Regardless of what her critics may have to say, the Vogue collaboration is yet another instance of Meghan proving to the world that she has no desire to leave behind the political activism she enjoyed before meeting her husband—arcane Royal Family “rules” (and the scandalized reaction when she sidesteps them) be damned.

“These last seven months have been a rewarding process…to take the year’s most-read fashion issue and steer its focus to the values, causes and people making impact in the world today,” Meghan said in a statement released by the Royal Family. “Through this lens I hope you’ll feel the strength of the collective in the diverse selection of women chosen for the cover as well as the team of support I called upon within the issue to help bring this to light.

“I hope readers feel as inspired as I do, by the forces for change they’ll find within these pages.”

Hopefully they’re able to block out all the noise, too.