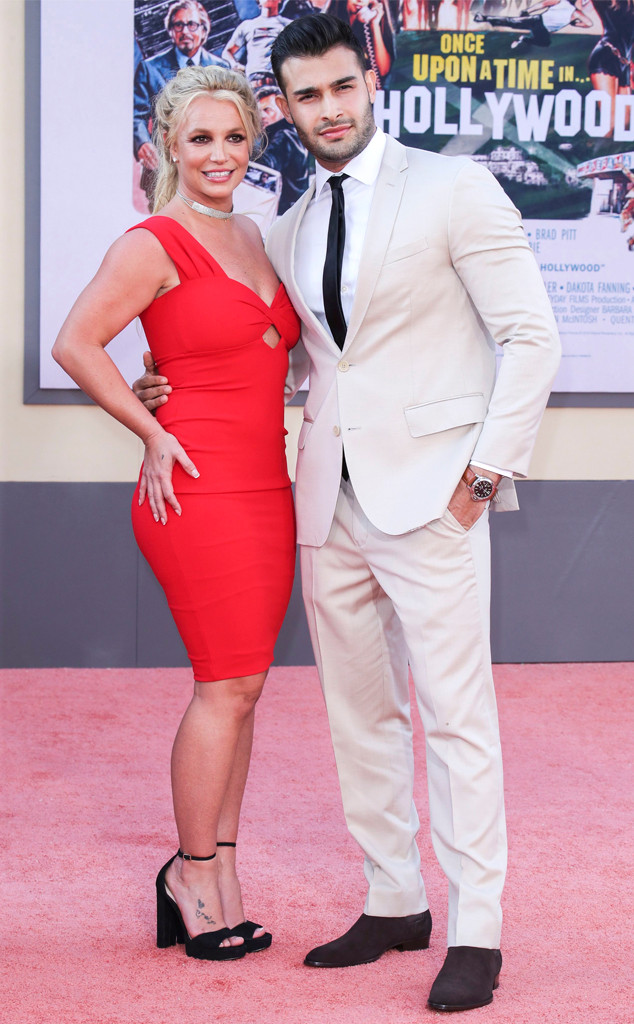 The 37-year-old pop star wore an especially sparkly diamond ring on that finger as she attended the Los Angeles premiere of Once Upon a Time in Hollywood alongside longtime boyfriend Sam Asghari. Britney complemented her seemingly new piece of jewelry with a red mini-dress, black chunky heels and flashy choker.

Spears and Asghari, who began dating in late 2016, have yet to comment on the possibility of an engagement, but they did look more in love than ever as they posed for photographs at the star-studded event. Monday evening’s date night also marked the “Toxic” singer’s first official red carpet appearance in more than year.

She commemorated the moment on Instagram by sharing several snapshots of her and Sam, writing, “Our first premiere.”

Britney faced renewed public interest in her personal life when she announced an indefinite work hiatus to focus on her father’s ailing health earlier this year. Then in April, the mom of two checked into a mental health treatment facility.

At the time, a source told E! News, “Sam has stuck by her side throughout all of her recent struggles and knows that this is just a phase in Britney’s life that they will have to adjust to right now.”

Our insider also revealed that the fitness enthusiast and model was “very helpful in making sure Britney did whatever she needed to feel better” and “stuck by her side” through the tumultuous chapter in her life.

Spears herself also set the record straight on the “out of control” rumors surrounding her wellbeing and status of her ongoing conservatorship. “I wanted to say hi, because things that are being said have just gotten out of control!!! Wow!!! There’s rumors, death threats to my family and my team, and just so many things crazy things being said,” she said on social media at the time. “I am trying to take a moment for myself, but everything that’s happening is just making it harder for me.”

More recently, Britney enjoyed a tropical vacation with mom Lynne Spears and a trip to Miami with Sam. She continues to keep fans up to date via Instagram, so only time will tell if she spills the news on this potentially exciting update in her love life!

E! News has reached out to Britney’s rep for comment.