Gracing the red carpet at the Giffoni Film Festival in Italy, the 22-year-old actress dazzled in a vibrant red and green floral dress that she paired with equally stunning burgundy heels—both of which are Dolce & Gabbana designs.

However, aside from Dyer’s bewitching fashion and beauty look on Sunday, she was joined by her boyfriend and Stranger Things co-star Charlie Heaton. He opted for a charcoal pinstripe suit that he tied together with a beige button-down. Very dapper!

While the two are extremely private about their relationship, they adorably (and briefly) displayed their romance on the red carpet. The 25-year-old British actor couldn’t keep his eyes of his girlfriend, and, at one point, showed towards his leading lady as they posed for pictures together. Additionally, the couple snapped a few portraits with Claudio Gubitosi, the artistic director and founder of the film festival.

Just last week, the pair put their love to the test as they quizzed each other with a lie detector for Vanity Fair. But even before they lovingly grilled each other, Dyer opened up about her relationship with Heaton and what it’s like to work with him. 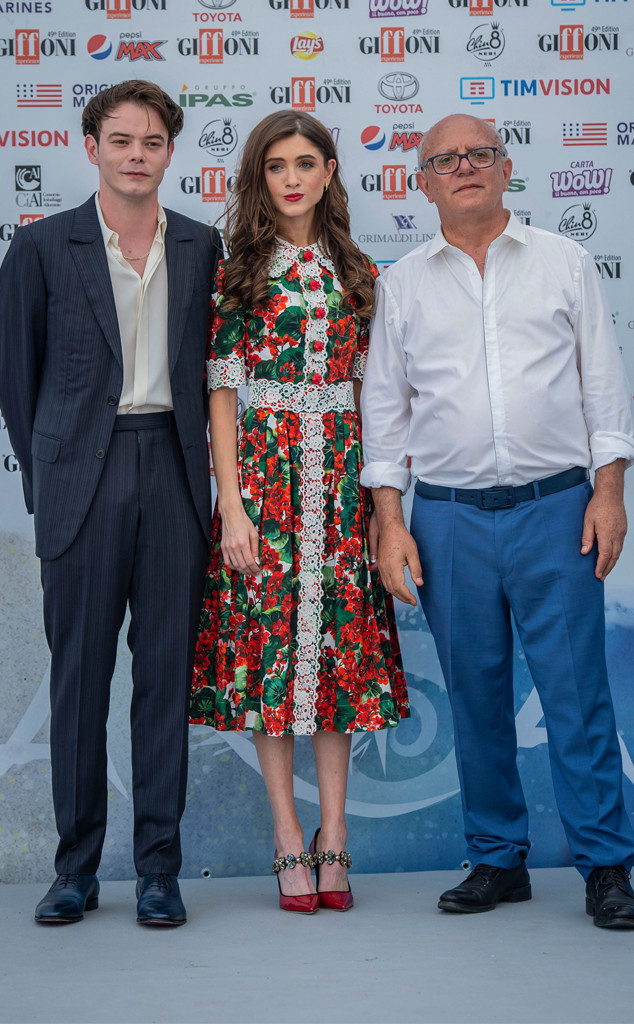 “It’s an interesting thing to work with somebody who you go home with,” she told Refinery 29 earlier this month. “It’s always really fun.”

She continued, “We’re really comfortable with each other. So we can play and feel more free, and we can talk about it before.”

And while the pair has put their love on display in public and shared their relationship a bit more, Natalia explained that she still likes to keep her personal life private. “That’s something important to me — with my family, with my friends, I really like to keep it for me,” she said.

Additionally, Charlie opened up working with his leading lady. “You can break the walls down with your partner. Because we work in the same industry and have had similar trajectories, we’ve gone through it together,” he told V Man magazine back in February. “Sharing that does bring you closer. They understand something that maybe no one else would.”

The couple first sparked romance rumors in 2016, shortly after the series premiere of Stranger Things. However, they didn’t confirm their relationship until October 2017, when they stepped out in New York City holding hands.