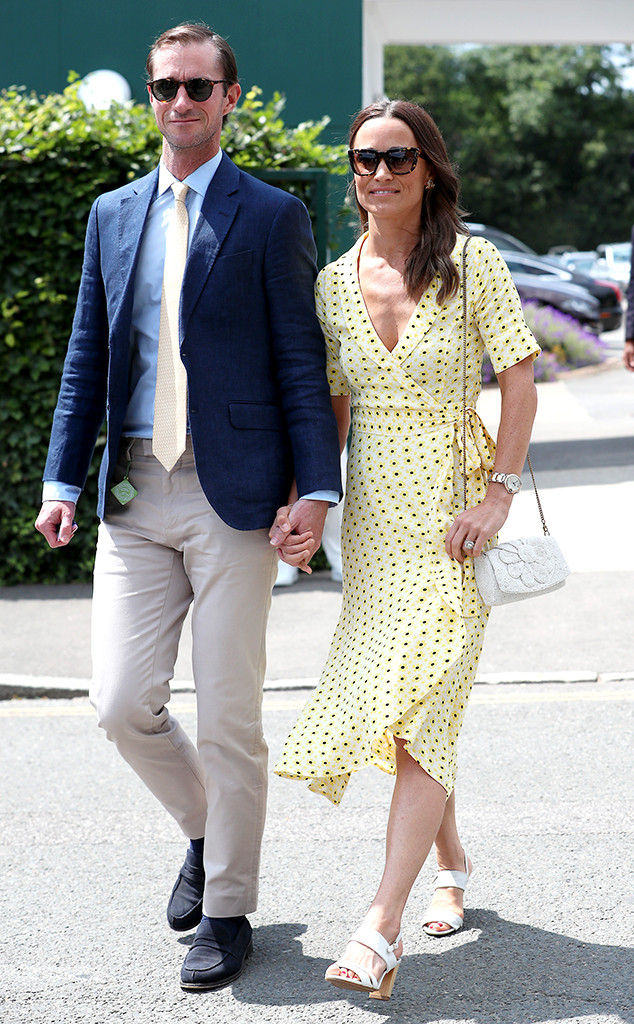 Pippa Middleton and her husband James Matthews are proving they are couple goals at Wimbledon 2019.

Heads turned when the writer and hedge fund manager walked into the venue in coordinated ensembles. The socialite wore a brilliant yellow wrap-dress from Ganni that complimented her athletic physique, while her hubby sported a navy blue sports jacket and yellow tie that matched her summery dress. To complete the look, Pippa donned a cute pair of white block-heels and chic sunglasses.

Earlier in the week, Pippa and her younger brother, James Middleton, made an appearance at the famed venue to watch a match. On that occasion, she wore a prim and proper dress by Stella McCartney, as well as a wide-brimmed hat from Luisa Kelsey.

The Royal Family has frequently been seen at the tournament in recent days. Kate Middletonand her sister-in-law Meghan Markleenjoyed a match or two when the games were just getting started and are expected to show up on Saturday to see Serena Williams.

There’s no doubt that there will be plenty more star appearances in the coming days, but here are just a few of our favorites:

Summer style is in full swing and the actress’ casual look is proof.

The Crown star gets animated while watching a particularly intense match.

How the tables have turned! The soccer player sits in the crowd as the athletes rally.

The True Detective star dons a fedora and shorts for the high-profile games.

Kate Middleton‘s sister and brother-in-law return to the courts for another day of intense matches.

The Dirty John actor and his wife enjoy a low-key day at Wimbledon.

On the heels of their honeymoon, the newlyweds enjoy a fun and exciting game.

Despite having her hands full, the British pop star looks effortlessly elegant in the stands.

The “1999” singer can’t get enough of all the excitement on the court.

Whether it’s a full suit of armor or a head to toe pink getup, the Game of Thrones actress proves she looks radiant in just about anything.

The Men in Black: International star stuns at the All England Lawn Tennis and Croquet Club.

Kate Middleton‘s stylish siblings stroll through the All England Club. Pippa chose a pink, Stella McCartney dress for the day.

The actress looks cool and confident in her monochromatic look for day seven of Wimbledon.

The Duchess of Sussex enjoys a girls’ day out as she cheers on close friend and tennis champ Serena Williams.

The Fleabag star is on the edge of her seat during a match.

The Spice Girls songstress can’t hide her excitement from the stands.

Wimbledon ready! Monáe looks ready for the court in a preppy, chic ensemble. She also posed for a picture with her music collaborator Nathaniel Irvin.

Kate Middleton‘s mom looks prim and proper as she arrived.

The Hunger Games star is dressed to the nines for day three of the sporting event.

The former baseball player and Jennifer Lopez‘s fiancé looks dapper in a suit and tie as he took in the match.

The Duchess of Cambridge wears a white shirt dress by Suzannah, which she cinched with a black Alexander McQueen belt.

The Australian comedian is all smiles as she donned a black Polo Ralph Lauren dress for her Wimbledon debut.

The 16-year-old son of David Beckham and Victoria Beckham goes for a casual all-white outfit for the second day of Wimbledon.