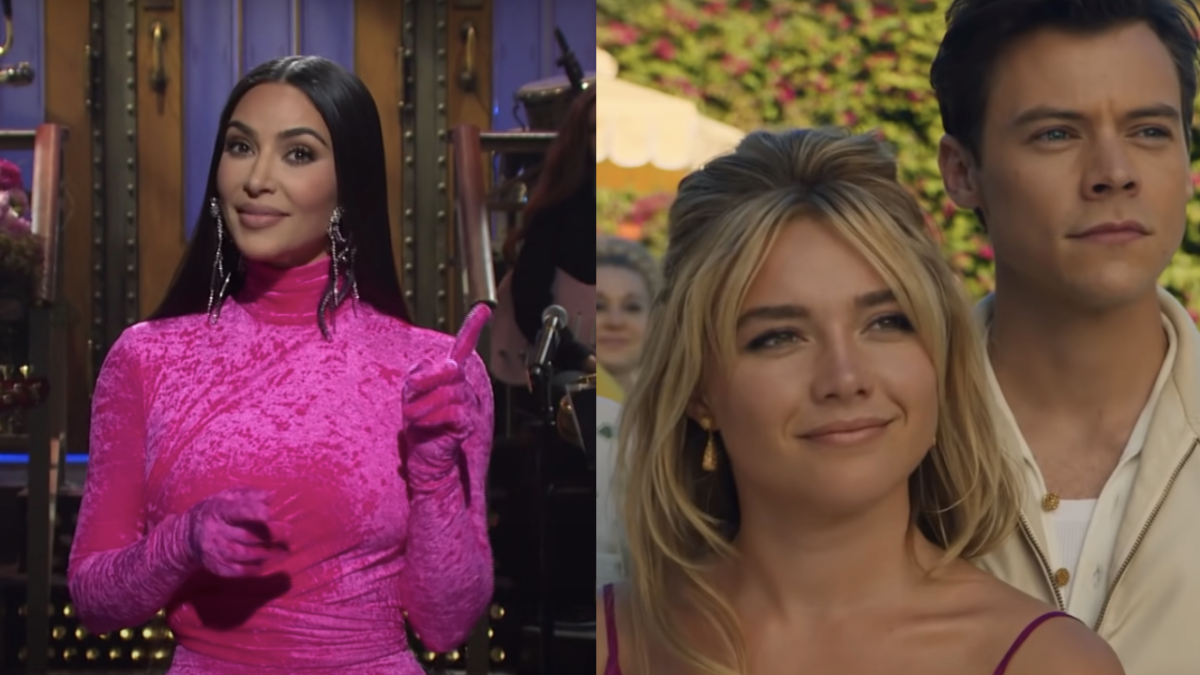 They say that all publicity is good publicity. And if that’s the case for Olivia Wilde’s upcoming thriller Don’t Worry Darling, then it should be a massive hit. The thriller has been the subject of countless rumors, including reports of a feud between the director and its star. Kim Kardashian has seen an early screening of Don’t Worry Darling, and shared her Harry Styles and Florence Pugh-oriented tae.

Don’t Worry Darling stars Oscar nominee Florence Pugh and pop star-actor Harry Styles as its two main protagonists Alice and Jack. There’s been some chatter about possible tension between the two actors over their pay and relationship to Olivia Wilde, which has helped increase anticipation for its release. Kim Kardashian offered her two cents on that pair of actors over on her Instagram Story, after seeing an early screening of the thriller. She posted her thoughts, check it out below:

Well, there you have it. While not weighing on the various rumors surrounding Don’t Worry Darling, Kim Kardashian seemed to thoroughly enjoy the psychological movie. What’s more, the reality TV icon and entrepreneur was also impressed by the performances of both Florence Pugh and Harry Styles. And that might be surprising regarding the latter performer.

Kim Kardashian’s Instagram Story shows how aggressive Don’t Worry Darling’s marketing campaign has been. In addition to billboards and trailers, early screenings have been offered to influencers like Kim Kardashians and the Real Housewives of Beverly Hills. This should help reach different types of moviegoers, and hopefully result in a major box office haul. Kim K definitely has a truly dizzying reach in regards to fans around the world.

In addition to celebrating Florence Pugh’s talents as an actress, Kim Kardashian also took the time to say just how pretty the 26 year-old star is. Although it’s perhaps her praise towards Harry Styles that will turn the most heads. The early reception for his performance wasn’t praised by early critics, so it’ll be interesting to see if audiences feel differently. As a reminder, you can check out Don’t Worry Darling’s trailer below.

As previously mentioned, there are a number of rumors circulating about possible drama surrounding Don’t Worry Darling. Perhaps the most popular is that Olivia Wilde and Florence Pugh are in the midst of a feud, especially since the Black Widow actress isn’t doing a ton of press for the project. There’s also been a ton of chatter about how/why Shia LaBeouf departed the cast, and whether or not he was fired. Then there’s Wilde being served custody papers live at CinemaCon, as well as the Styles/Chris Pine spitting snafu. And that’s before the movie even hit theaters.

Luckily for those curious moviegoers, Don’t Worry Darling will be released shortly on September 23rd. In the meantime, check out the 2022 movie release dates to plan your next movie experience.