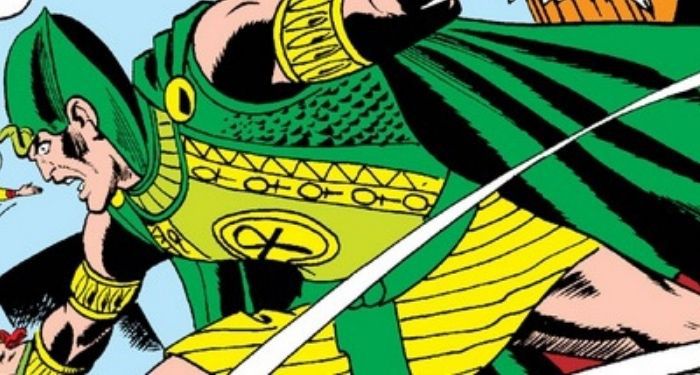 What is a superhero without a supervillain? Not much. Some supervillains, however, are worth a lot more than others. I have therefore decided to spotlight some lesser-known villains. Are they underrated gems or irredeemable losers who deserve to be forgotten? You decide! Today’s subject: the Living Monolith!

First appearing in X-Men #54-58 in a storyline whose importance far outstrips his own, Ahmet Abdol was an archaeologist from Egypt (though he looks suspiciously Caucasian). He was also a mutant who gained his powers from “cosmic rays,” later called “solar rays,” because who needs consistency? But there’s another mutant — Alex Summers, brother to Cyclops — who gets his powers from those same rays. Apparently, there are only so many cosmic rays to go around, and as Alex’s powers grow, Abdol’s wane. I don’t think cosmic rays work like that, but fine.

Under delusions of godhood, Abdol did what anyone would: become a villain called the Living Pharaoh and kidnap Alex straight from his graduation ceremony.

The first time Alex realizes he has mutant powers is when he suddenly blasts the Living Pharaoh with an energy field. He became the hero Havok in Issue 58, but first, he gets his power zapped. This allows the Living Pharaoh, now with augmented powers, to turn into a giant called the Living Monolith.

For about a minute. He is immediately defeated by Alex’s nascent powers and doesn’t do much for the rest of the storyline.

Despite the ignoble early defeat, the Living Monolith is actually quite powerful. Thor at one point remarks that his power is on par with A-listers like Thanos. Of course, the only way he stays that powerful is when he can kidnap Havok and dampen his powers by locking him in a box. This makes him very unpopular with our heroes, who inevitably come to Havok’s rescue and de-power the Living Monolith until he is the Living Pharaoh again. He occasionally finds some other power source, but this never lasts long, either.

Unfortunately, I haven’t read this one, as it’s not on Marvel Unlimited at this time. However, from what I’ve read about it, I’d say it’s a notable appearance for three reasons.

First, we find out that Abdol had a wife and daughter, both of whom are now dead.

Two, this issue shows Abdol’s human (rather than despotic) side. After watching a man sacrifice himself to save someone else, he is so touched that Abdol hurls himself into space, where his giant body becomes the surface of a new planet. (A Living Planet, if you will.)

Third, a more famous Egypt-themed villain, Apocalypse, made his debut in this issue, at least retroactively: it was later revealed that he was one of the Living Pharaoh’s candy striper henchmen. Apocalypse would later be revealed to be much more important in Abdol’s backstory than anyone suspected, but we’ll get to that momentarily.

Here’s where the Living Pharaoh’s story gets weird. (Yes, it is just getting weird NOW.)

After a while, Abdol’s planet self fell out of the sky and into the Utah desert, where he possessed a teenage girl, Akasha Martinez. Using her body, he stole an ancient Egyptian staff from a museum, which gave him/her enough power to become the Living Pharaoh again. This displeased Spider-Man a lot.

But Abdol’s hold on Akasha wasn’t complete. She retained enough control to fight against his more violent impulses and ultimately kicked him out of her brain. As a reward, the Egyptian gods granted her the power of flight. That’s weird, right? It’s not just me?

Apparently, Marvel didn’t like this trajectory for Abdol’s character. This incident was never mentioned again and got overwritten by his next major appearance in…

The Stack Newsletter
Sign up to The Stack to receive Book Riot Comic’s best posts, picked for you.
Thank you for signing up! Keep an eye on your inbox.

Abdol played a crucial role in the “Apocalypse: The Twelve” storyline, which stretched across multiple X-books in the late ’90s/early ’00s. I’m spotlighting these two issues because they reveal some important facts about Abdol’s origins.

Turns out our malevolent mutant isn’t really a mutant at all. He was kidnapped off the street and mutated by Mister Sinister, at Apocalypse’s direction, using Havok’s DNA. This explains why the supposedly “near-infinite” cosmic rays could only power either Havok or Pharaoh, but not both simultaneously: their powers are physically linked.

Apocalypse planned to use the Living Monolith as a power conduit through which he could claim the power of the 11 most powerful mutants on Earth. This caused Abdol to lose what few marbles he still possessed and go on another take-over-the-world rampage. Both he and Apocalypse were, of course, defeated in the end.

Y’know that famous Uncanny X-Men cover where Jean Grey, as Dark Phoenix, crushes the team name between her hands? Abdol did it first.

Both of these covers were drawn by groundbreaking artists: Issue 56 marks the late Neal Adams’s introduction to X-Men, while John Byrne’s reinterpretation is often hailed as one of the greatest comic book covers of all time.

You could argue that a lot of supervillains are pretty one-note characters: all they want is revenge, or world domination, or ultimate power. But some of those characters get a chance to gain a little nuance or grow out of their restrictive roles. At the minimum, we learn more about what makes them tick, which either allows us to sympathize with them to some extent or at least view them as more three-dimensional.

Aside from Marvel Graphic Novel #17, Abdol really never gets more development than what we see in his first appearances. This makes him feel more stagnant than other villains. He’s just not that interesting as a person.

I would like Marvel to keep using him until they actually color him right, i.e., not like a white dude. And it certainly is noteworthy to have a pharaoh-themed villain who is actually Egyptian, but honestly, there are better pharaoh felons out there.