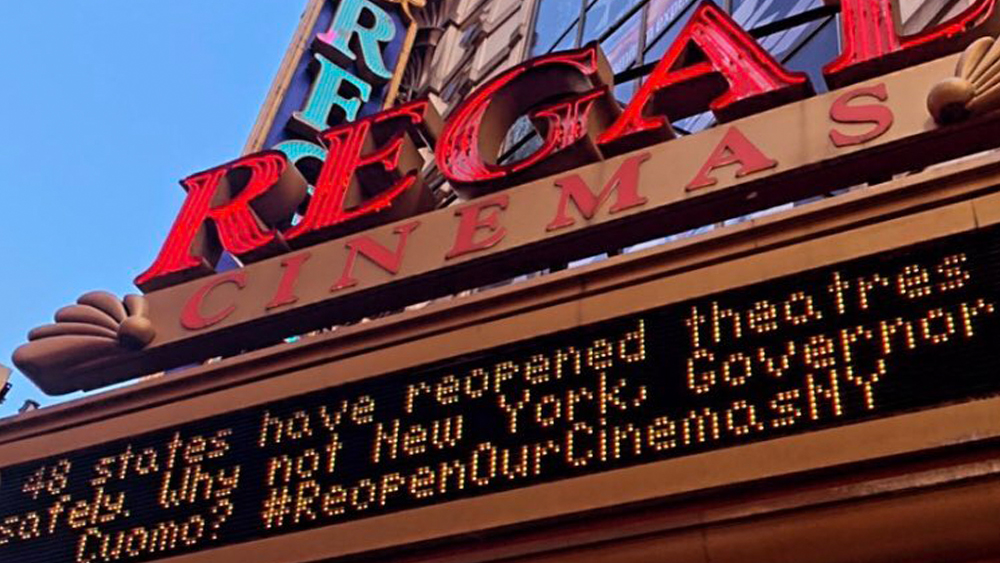 Regal Cinemas is taking it to the streets, with the marquee of its iconic and shuttered Times Square multiplex admonishing New York Governor Andrew Cuomo for being just about the last pol in the country to reopen cinemas.

“48 states have reopened theatres safely. Why not New York, Governor Cuomo?” blared from that strip of black that once upon a time displayed scrolling movies titles, then, for months, read “Temporarily closed.”

Regal’s financially strapped parent, Cineworld of the U.K., announced last weekend that it would close its U.K. and U.S. locations — blaming the latter in large part on the key New York market being dark. The state has opened malls, gyms, bowling allies, casinos, museums, indoor dining and other businesses but has held a tough line on movie theaters for reasons that seem to unknown to exhibitors. Chains say safety protocols instituted under NATO’s CinemSafe initiative and other precaution make theaters as safe or safer than these venues and stress that no known COVID infection has yet been traced to a theater despite their being open in most U.S. states and around the world.

AMC Entertainment CEO Adam Aron yesterday also called on Cuomo to open theaters in New York, which, however, is dealing with new clusters of COVID infections in Brooklyn, Queens and upstate. So Aron urged Cuomo to do like California. Los Angeles theaters are still shut but the state is allowing cinemas to open on a county-by-county rolling basis where it’s safe. Having no guidance at all in New York, no list of rules, no possible timeline, is discouraging studios from opening big films.

When queried, the governor’s office has said basically said, back off, he’s doing everything possible to reopen the state safely. A state official recently told Deadline that concerns about people congregating going into and out of theaters reason for the delay.

Cuomo does have his hands full just now with infection rates in what are now designated at Red Zones, largely around ultra-Orthodox Jewish communities that he said have flouted mandates for mask wearing, social distancing and mass gatherings. This week, he ordered synagogues closed to more than ten worshippers and shut down schools and nonessential businesses in the Red Zones and limited activity in surrounding concentric Orange and Yellow Zones to try to contain the spread.

Tensions have been high, with community leaders attacking Cuomo as anti-Semitic and organizing large street protests. A national Orthodox Jewish group sued immediately. But earlier Friday a federal judge in Brooklyn ruled that the state’s restrictions can stand, asking, “How can we ignore the compelling state interest in protecting the health and life of all New Yorkers?”

The Honest Reason Kevin Hart Turned Down An Offer To Go To Space
See A Shirtless Adam Driver Turn Into A Centaur In New Ad, Because Why Not
‘Big Brother’ Star Mike ‘Boogie’ Malin Must Pay Will Kirby Big Money in Stalking Case
Top 10 90s Movies You Forgot Were Awesome
Eiza González Shines As Bulgari’s Newest Ambassador